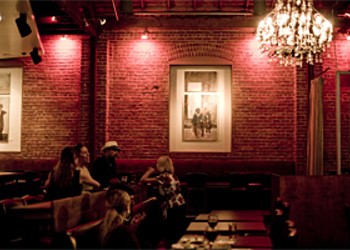 Sanctuary for Salvadoran Food Give me your tired, your poor, but most definitely your pupusas. October 22, 2008

Dixie: Southern Meets Californian Down Home on the Presidio

Chef Joseph Humphrey has spent the past couple of decades cooking up a résumé to be proud of. The Tallahassee native arrived here from New Orleans in 1994 and worked under the tutelage of local culinary superstars like George Morrone,…

Troya: Traditional Mediterranean Gets Tarted Up

The eastern Mediterranean is the Lascaux, the Bethlehem, the Cooperstown of food. It was here that animals were domesticated and crops were planted for the first time. As a result, the concept of villages and kitchens and written recipes evolved…

Summer Guide: Bars on the Bay to Watch the America's Cup

The America's Cup World Series (a sort of practice run for the 2013 America's Cup races) comes to San Francisco Bay on Aug. 21-26 and Oct. 4-7, and if the grand spectacle of yachtsmen at play isn't intoxicating enough for…

Summer Guide: Classic Cocktails Are Alive and Well in S.F.

We sat in the corner bar at Victor's and drank gimlets. "They don't know how to make them here," he said. "What they call a gimlet is just some lime or lemon juice and gin with a dash of sugar…

Sporadic bursts of activity notwithstanding, baseball is as sweet and drowsy as summertime itself. Sure, there's the occasional home run, stolen base, or double play, but the true nature of the game is in the chitchat between the base runner…

Amarena Brings Back the Free Spread ― But Only on Thursday

The place: Amarena, 2162 Larkin (at Green), 447-0441, amarenarestaurant.com The hours: Thu. 6-9:30 p.m. The deals: Weekly free buffet of Italian specialties The digs: Tiny hideaway on a quiet corner of Russian Hill feels like a homey Tuscan hangout with…

If you Googled "French food" and got one of those Wikipedia stubs listing the Twenty Classic French Dishes, it would look something like the menu at Cafe des Amis. Everything from some Reader's Digest version of the Larousse Gastronomique is…

McCormick & Kuleto's Wants You to Soak Up the Booze

The place: Schroeder's, 240 Front (at California), 421-4778 The hours: Weds.-Fri., 4-6 p.m. The deals: Free hot snack items The digs: This venerable old rathskeller has been serving up the suds and sauerbraten since 1893 (in the same location since…