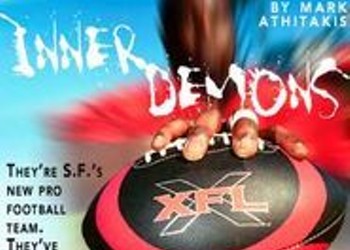 Inner Demons They're S.F.'s new pro football team. They've got second-rate players, an untested product, and a concept with a history of failure. But that's OK -- they have a great marketing plan. January 24, 2001

The Return of the Bastard Angel To resurrect his reputation as one of America's greatest poets, Harold Norse is counting on the help of one of the city's most despised organizations -- Act Up S.F. November 08, 2000

A Breath of Fresh Air

By Amulya Malladi Ballantine Books (2002), $23.95 Amulya Malladi's gemlike first novel has a provocative, almost absurd concept -- it's a love story framed by the horrifying Union Carbide gas leak in Bhopal, India, in 1984. In the midst of…

How dangerous is Al Qaeda in America?

THE AL QAEDA THREAT: Recently, you may have read or heard about the case of Jose Padilla, a young American who rose through the management ranks at Taco Bell and was later captured for…

Read It and Weep

People have accused the San Francisco Chronicle of a variety of shortcomings, but there's little question it's a paper that knows its audience. In the Chron's June 11 edition, critic Steve Winn spun out a lengthy piece about how and…

Contrary to earlier reports, "Harold's Historic Homo Home Movies" will not be screening this Sunday as part of the Lesbian & Gay Film Festival. A selection of Super 8 films culled from the massive private collection of longtime San Franciscan…

People call Pedro Ordenes crazy a lot. It's an off-the-cuff sort of thing, a joke. But you wonder. Maybe the word comes up so often because Ordenes, who is 55 years old, has swum between San Francisco and Alcatraz Island…

You may already be familiar with the oeuvre of San Francisco novelist Russell Rowland, though you may not know it. A few years back, Steven Yang, owner of local fortune-cookie maker M&Y Trading Service Co., went looking for somebody to…

Everything that's good and bad about West Coast literature is stuffed into the consignment rack of City Lights Bookstore. From hand-stapled zines to perfect-bound poetry collections to puckish comic books, these shelves are teeming with hundreds, if not thousands, of…

"These are our files," says Cappy Larson, opening a desk drawer in the attic of her Haight District home. "Don't look closely." The drawer is stuffed with folders, neatly arranged. Inside, Larson says, are letters from the hundreds of people…

Sticky Situations "There's a very fine line between '"hobby' and '"mental illness,'" read the sign on Frank Bachenheimer's booth at the Cathedral Hill Hotel. Bachenheimer is an Illinois-based stamp dealer who understands that philately culture can be a bit ...…

Nothing Remains the Same: Rereading and Remembering

By Wendy Lesser Houghton Mifflin (May 2002), $24 People are lousy readers. We keep hoping for that "perfect" reading, during which we gather deep meaning out of every line, but few people concentrate that well, and even fewer writers are…