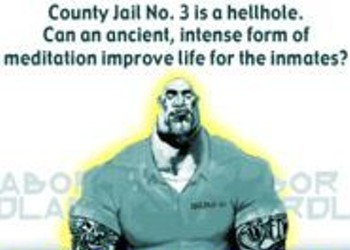 Hard Labor County Jail No. 3 is a hellhole. Can an ancient, intense form of meditation improve life for the inmates? December 20, 2000

Magazine Dreams Will San Francisco finally get the city magazine it deserves? March 14, 2001

Having just completed Stanford University's renowned law school program, and now preparing full time for next month's rigorous California bar exam, Dylan Vade's total immersion in the law only underscores what he finds lacking about it. As a female-to-male transgendered…

There she was, the goddaughter of Quincy Jones, talking scat with the Barbra Streisand of Hong Kong on an all-Mandarin TV interview show hosted by a man known as the Asian Larry King. Come again? You know Patti Austin. She…

From our table at a sidewalk cafe in August 2000, my partner Mark and I took turns pointing out things that made us smile: a young couple pushing a baby stroller, a rambunctious puppy tugging at his leash, an elderly…

Art of the Scare

Mrs. Oglesby is one scary-looking substitute teacher. She's got the requisite mean scowl, gray hair pulled into a tight bun, and horn-rimmed glasses. But that's nothing compared to the giant toilet plunger she carries, which can flush the junior high…

The House That Chuck Built

When an estimated 7,000 people walk through the doors of San Francisco's new $15 million gay and lesbian community center during a weeklong opening gala next week, prominently displayed above the front door will be the name Charles M. Holmes,…

Bozo the Clown packed it in this summer, but for today's working and aspiring clowns, the response was relief rather than sadness. In the heyday of Bozoism decades ago, nearly 200 TV stations across the country broadcast local versions of…

The Adventures of Capt. GayMan

During the presidential campaign, candidate George W. Bush announced he was a ""Don't Ask, Don't Tell' man," supporting the controversial policy of how to deal with gays in the military. Bush's assertion was a departure from the traditional Republican stance…

America's first gay band is looking a little older and less rebellious under the lights in a rare San Francisco performance. Pansy Division hasn't been heard from in a while, other than at the occasional gay pride festival in places…

From a window table overlooking the tree-lined stretch of boutiques, bookstores, and cafes near the Stanford University campus, two professors dine on spring rolls and tom yum soup as they ruminate on life and death half a world away. Drs.…

While virologist Phyllis Kanki fights AIDS in Nigeria with Ivy League research labs and $25 million at her disposal, a 27-year-old graduate student in history at Stanford hopes to start a similar prevention initiative in Togo -- with notably less…