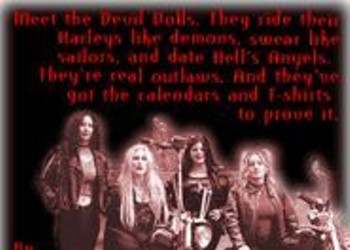 Biker Babes Meet the Devil Dolls. They ride their Harleys like demons, swear like sailors, and date Hell's Angels. They're real outlaws. And they've got the calendars and T-shirts to prove it. December 27, 2000

Throwing Away the Key Why Gov. Davis' just-say-no parole policy is wrong, Exhibit No. 1: Eddy Zheng has earned a college degree in prison, sings in a church choir, works with at-risk youth, has the support of clergymen, college professors, his prison counselor, and the June 05, 2002

Andrea Irvin's college bedroom is at once a suburban schoolgirl mecca and a shrine to the Republican Party. The UC Berkeley junior, who studies business and economics, has affixed a neat row of bumper stickers to her door ("Viva Bush!"…

Sex and the Single Psychologist

In March 2000, Dr. Alvin Cooper, a clinical psychologist and an expert on the obviously marketable subject of sex and the Internet, made an appearance on The O'Reilly Factor. During the conversation, the host took an almost flippant tone with…

Quirkyalone: A Manifesto for Uncompromising Romantics

By Sasha Cagen HarperSanFrancisco (2003), $19.95 By now, you must have heard the term "quirkyalone," which, according to the official definition, is "a person who enjoys being single (but is not opposed to being in a relationship) and generally prefers…

Alice B. grew up in Bungoma, Kenya, a district near the border of Uganda with a distant view of the jagged, extinct volcano Mount Elgon. Surrounded by rolling hills and verdant, grassy fields, her hometown has soccer teams, Girl Scout…

In Monique Motyl's studio (which is really a room painted cotton-candy pink in her Alamo Square apartment), there is a bookshelf filled with plastic storage boxes in which she keeps her art supplies. Among the bins, which are overflowing with…

Adrian Freed, a bespectacled, middle-aged techie sporting a mop of unruly brown hair, swings open the door of the Guitar Center in El Cerrito with visible delight. Like a mountaineer taking in an exquisite vista, Freed pauses for a few…

Albert Johnson grew up in Richmond, Calif., in a part of town where drug dealers loitered on the corner, gangs had both a visible and psychological presence, and drive-by shootings were not a surprise. Built small and lean like a…

John Doe No. 60, a drunk, homeless man who has never been identified, was murdered in 1985 in San Francisco. His lower lip was cut, allegedly so that the killer could drink his blood. His chest and neck were vigorously…

Alexius McNeal, a 13-year-old living in Bayview-Hunters Point, was killed by a single gunshot to the back of her head on the morning of April 21, 1994. The girl was found dead in her mother's bedroom, her legs protruding from…

On the afternoon of Aug. 28, 1997, an African-American man wearing a black windbreaker and dark jeans robbed a Bank of America in east San Jose. Brandishing a black semiautomatic gun, the thief jumped over the counter, ordered the tellers…

Anticipating vociferous opposition that could sink him politically, UC Regent Ward Connerly attached a laundry list of exemptions to his Proposition 54, an initiative on the Oct. 7 ballot designed to prevent the state from collecting racial data. Among the…