Let It Bleed The city is awash in red ink, thanks to billion-dollar benefit giveaways and our politicians' lack of will. October 20, 2010 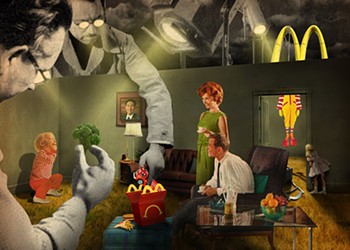 If you're a kid who's just moved to San Francisco, excited for your new job and eager to make a difference, are you likelier to hang around a classic San Francisco venue whose glory days you can never really be…

“This is a great move for Google, because...huh,” said trader Vince Sable.…

They’re required to present both sides of the robbery. Truth may be priceless, but items used to uncover it can…

@The Exhibitionist  by Benjamin Wachs August 10, 2015 @ 4:00 pm Tags: Things We Made Up for Satirical Purposes, crime, photojournalism, Video
News, The Snitch

They've admitted that some children will be left…

Left Coast City: Why San Francisco is the Most Liberal Place in the Country

A new report out of UCLA and MIT declares San Francisco the most liberal city in America. What makes us so liberal? • Our Gay Agenda has more footnotes. • Even our liberal activists get protested by other liberal activists.…

Ed Lee: "Willie Brown Taught Me Everything I Know"

SAN FRANCISCO – Apple Inc.’s senior leadership announced this week that they are leasing a 76,000 square foot in San Francisco in order to troll the city. “When the Dark Room closed, we saw a real opportunity to rub…

@The Exhibitionist  by Benjamin Wachs August 3, 2015 @ 11:05 am Tags: Things We Made Up for Satirical Purposes, Technology, Apple, displacement, gentrification, Video
Culture, The Exhibitionist

Video
Why Are the Bay Area's Roads So Bad?

· No justice, no roads. · We haven’t got an “Uber for quarterly transportation funding allocations and…

The Inadequacy of Noire Lounge

As a live pianist played vaguely familiar tunes at the Noire Lounge, I tell E. that if I ever go back to grad school, I think I'd like to write a dissertation on the semiotics of hipster bar decorations. Take…

· The party planner was from South Carolina…